Gionee is again in news for its upcoming flagship android smartphone, the Elife E7. The Elife E 7 will be the first smartphone from the company and the world to have 2K resolution display and 2.5GHz Qualcomm Snapdragon 800 processor. The company has there own manufacturing and designing firm. It seems now company wants to raise its reputation by launching E7 smartphone. For now company is popularly know for its budget and durable smartphones. The company’s CEO Lu Weibing has shared on his Weibo page that the handset will feature a Qualcomm 8974AC quad-core Chip clocked at 2.5GHz frequency. 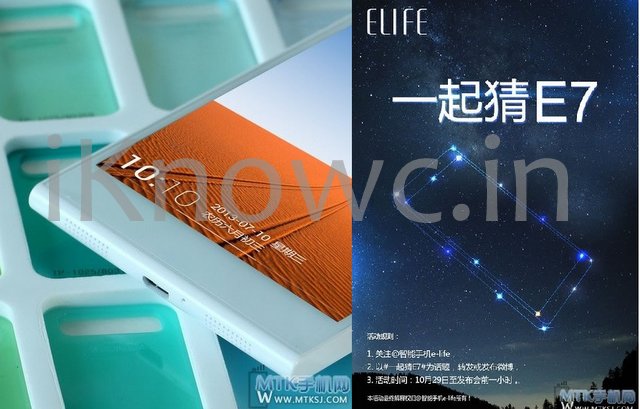 The full specifications of the phone are not known yet, but considering to earlier rumors, the Gionee E7 would have 6.1-inch GIZO screen imported from sharp having 2560 x 1600 pixels resolution at 498 ppi. The handset would run on Android 4.3 Jelly bean operating system with AMIGO UI. It would feature a 13MP primary camera on the back and a 5MP front facing camera on the front. The handset will be capable of recording full HD videos.

The Elife-E7 will have 2GB of RAM, 32GB on internal storage and 3500mAh battery. The rumor is that the phone will have finger print sensor on the rear, unlike the iPhone 5s. The Phone would be priced under RS35000 in India. The Gionee Elife E7 will have uni body construction to make the handset slimmer.