Micromax Canvas 4 A210 finally launched at RS 17,999 . After getting lot from news and creating lots of buzz , Micromax launched its new flagship device – Micromax A210 . I don’t think that most of Micromax lovers are happy today . The way the Micromax had followed to make its 1.2GHZ quad core device popular is really prank y . Most of the peoples are thinking that the Micromax A210 would have came with 2GB ram , 1.5GFHZ Quad core CPU & 4G LTE too .Gionee has also launched Gionee Elife E5 1.5GHZ quad core device with 4.8inch Super Amoled HD Display . Not just Gionee ,Iberry & Xolo has also launched  iBerry Auxus Nuclear N1 & XOLO PLAY T1000 bot with 1.5GHZ quad core cpu ( but XOLO with Nvidia Tegra 3 ) . Karbonn Titanium S9 is another RIVAL of the A120 . 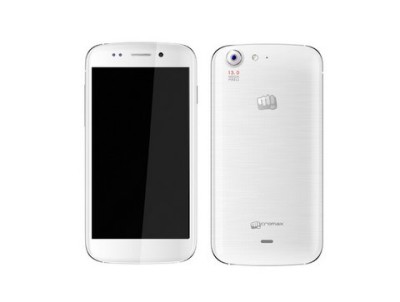 No doubt , there are some special features that are added by the company to please the customers but that are not enough we think.  Micromax Canvas 4 has 5inch capaitive IPS display of 720p resolution with corning gorilla glass protection . It is powered by 1.2GHZ quad core processor joint with 1GB of RAM . It has access to DUAL SIM card slots ( GSM + GSM ) . It is runing on Android 4.2 jelly bean out of the box . To capture living or non living it has 13MP rear auto focus camera with LED flash & has 5MP front facing camera .

The Micromax A210 canvas 4 is capble of playing as well as of recording 1080p videos at 30FPS . The internal memory is of 16Gb & which can be expandable upto 32GB . with Micro SD card . The device is house of 2000mAh battery . Other feature like 3G , 2G , WIFI ,Bluetooth , GPS / A-GPS , 3.5mm audio jack & micro USB connectivity are also there . The phone has aluminum frame not just to look good but also to boost the signal strength . When you look away from the phone it pauses the movie ( similar to smart pause )  .