Nokia Lumia 525, the company’s latest Windows Smartphone is now official in India. The Lumia 525 is successor of the 520 which was launched earlier this year. The specs of the phone are nice, specially 1GB RAM is amazing. The device comes with 4-inch IPS display with 800×480 pixels resolution. It gains the strength from 1.0GHz 2-core CPU and houses 5 megapixel shooter. 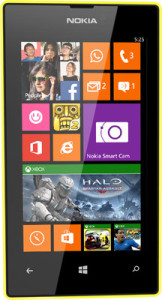 The price of the handset is not announced yet, it would be announced in first week of January 2014. The company recently launched the phone in Singapore at price of SG $249, which is about 12,500 RS in India. The Nokia Lumia 525 comes in Orange, White, Yellow and Black colors.