Samsung’s upcoming Smartphone with flexible curved display is creating huge hype. Now the specifications of Samsung Galaxy SM-G910s are known. The recent rumor was that the company will launch the device in November. LG is also working on Flexible smartphone, the G FLEX and will also soon reveal it officially. Although the accurate release / launch date for the both devices is not known yet. Nokia’s Lumia 1520 smartphone and Smartwatch was recently appeared in picture. 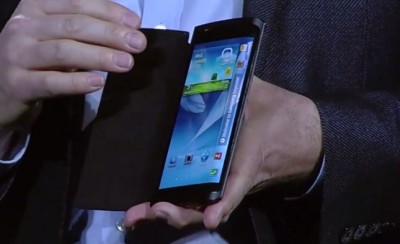 We have just discovered a new GFXBENCH benchmark entry which scores 24.6fps , that would be of Samsung curved display phone. The code name id SM G910s. The device will have Qualcomm Snapdragon 800 processor with 2GB of RAM and Adreno 330 GPU (graphics processing unit). It would have 6inch display with Full HD 1080p resolution. It will feature 3G, 4G LTE, WiFi, Bluetooth,NFC, DNLA, GPS and USB port.