Sony the very famous brand highly known for its quality products that are high in price too , but now sony comes with Sony DSC H200 with attractive specs . Sony DSC H200 Cyber shot comes with 20.1MP image sensor and 26X optical zoom with 52X digital zoom  . Sony DSC H2oo has 3ich lcd display . The image sensor used  on the Sony DSC H200 is Super HAD CCD . Sony DSC H200 has many things which makes it more than a standard camera we will talk them in their respective sections . Sony cyber shot DSC-H200 is successor to DSC H100 . 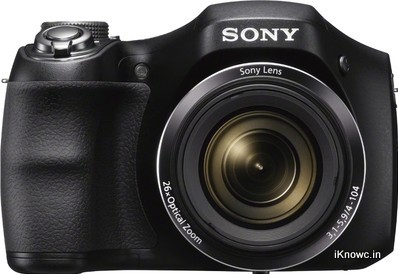 SONY DSC H200 has Super HAD CCD Sensor with 20.1MP resolution . So SONY DSC H200 image sensor promise you to deliver good image quality . Sony image quality is would be much better than its competitors . Sony DSC H200 can record  video upto 720p resolution . Sony does a thing which is really great that is they included Optical SteadyShot image stabilization which help to record  clear  , smooth and blur free video .

As we already tell you about the image sensor and its resolution that is Super HAD CCD Sensor with 20.1MP resolution . Sony DSC H200 has 26X optical zoom as well as 52X Digital zoom . SONY DSC H200 has inbuilt memory of 55Mb and you can insert memory card to expand the storage (MS Duo and SD/SDHC compatible) .

The device has maximum shutter speed of 1/1500 sec and minimum of 2 sec. Sony DSC H200 is powered with AA Alkaline Batteries . The 3inch Lcd Display with 460 dots  at the rear makes the device more approachable to user . Sony DSC H200 can record video upto 720p resolution in MP4 format and can capture still image at resolution of 20MP in jpg Format  . The weight of the camera body is 430gram . SONY DSC H200 has Aperture of  f/3.1 – f/9.7 which is decent and has 35 mm Equivalent Focal Length – 24 – 633 mm . Mic for audio recording is Mono . The Built-in flash is located on the top of the desk .

Sony DSC H200 Cyber shot has many competitors to which you can compare the device , as some of them are listed below …