Android phones nowadays come with great connectivity options, like 3G and 4G LTE. The 3G and 4G LTE network mode offers faster internet data speeds than the 2G, GPRS or EDGE. If you subscribed to 4G LTE or 3G Internet Data plan from BSNL, JIO, Airtel, Idea, or Vodafone it is very vital and beneficial to use it in 4G LTE only, HSPA+ or WCDMA 3G only as Preferred Network Type mode for faster Internet data speeds. In some cases to avoid heavy data charges, you might prefer to go with 2G GSM GPRS network priority mode only.

If you have 4G phone below methods will help you to switch between different network modes or force 3G / 4G only mode on Android. But if you have a 3G smartphone and want to use 4G LTE SIM card on the 3G phone you can check the last two methods/tricks but it is not possible to use 4G LTE only network operator SIM on 3G or 2G phone.

You can buy JIOFI and can make HD calls and use 4G data speed on any 3G or 2G supported phone over Wi-Fi. Otherwise, you need to upgrade to LTE / VOLTE capable phone.

How to change 2G to 3G only, Edge to 4G only network mode:

To change from 2G to 3G only, Edge to 3G only, 2G to 4G LTE only or Edge to 4G simply go to Android Settings >> Wireless & Networks >> Mobile Networks >> Select The SIM card >> Network Mode. As shown in the image below from Network Mode you can select the network that you want to choose. All the possible option will appear. If 4G LTE is not showing then that mean your phone is not compatible for 4G SIM or 4G signals so is with the 3G.

The android operating system offers a variety of options to choose the best Preferred network according to your comfort. We found that in some Dual SIM smartphone users face difficulty in selecting their desired preferred network mode. Below are two solutions, with which you can Toggle Switch or Change from 2G to 3G or force 4G LTE only mode or vice-versa.

Many are trying to switch to 4G LTE so that they can enjoy Reliance JIO 4G VOLTE free calling and unlimited data offer on mobile phones. Now Airtel 4G, Vodafone, JIO, Idea, BSNL unlimited plan (3G without usage restriction), and many other operators have also launched low price data plans, but mostly with Data cap/speed restriction. The below image illustrate how to convert 3G 4G only network mode in an android phone. 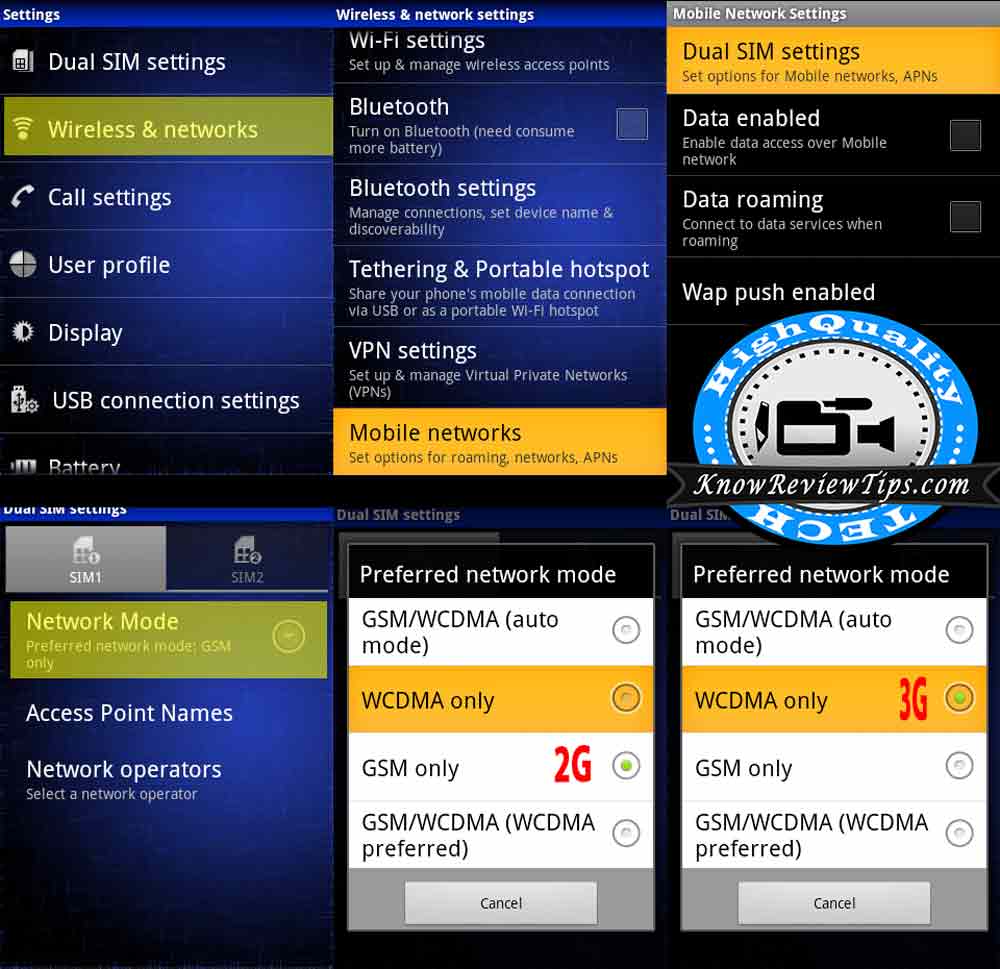 While doing the Switching between networks make sure your SIM card is compatible with the Network type you chose. WCDMA means 3G or 3.5G, GSM Means 2G (GPRS or EDGE) while LTE or VOLTE means 4G network. If 3G or 4G LTE option is not showing, it means your phone is not compatible with 3G/4G sim cards (Airtel, BSNL, Idea, Vodafone, Tata Docomo, Reliance JIO)respectively.

*NOTE: 1# Always choose 4G for higher Internet Speeds. 2# If you have chosen 4G LTE only it means that SIM will only work if 4G signals are available so always choose preferred instead on the ONLY mode so that if the 4G signal is low the phone can run on 3G signals as a backup. 3# There could little change in the of Settings option depending on different android versions.

You can also select a Combination of 2G + 3G ( Will automatically choose 2G network when 3G is not available). Many users found that after selecting 4G LTE or 2G Network the status bar shows no network signal. This could be due to several reasons, diagnose it in the following ways:

If the Internet on the phone is not working make sure you have configured correct APN Internet Settings. Solution 2: 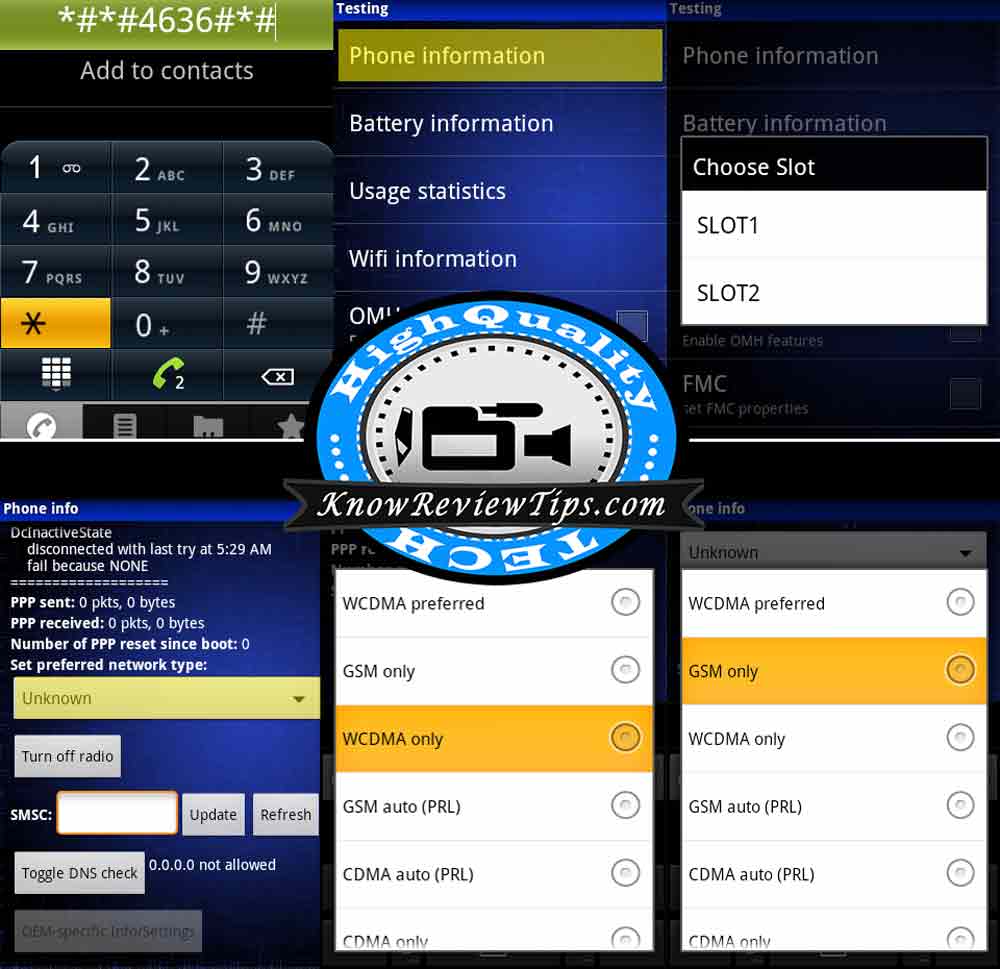 If your mobile phone is not showing the required Network or Preferred 4G / 2G / 3G Mode, you can have more options in Advance Internet Settings method to force specific network mode.

To Change 2G to 3G to 4G LTE only network mode in Android Phone via USSD code, take the following steps: 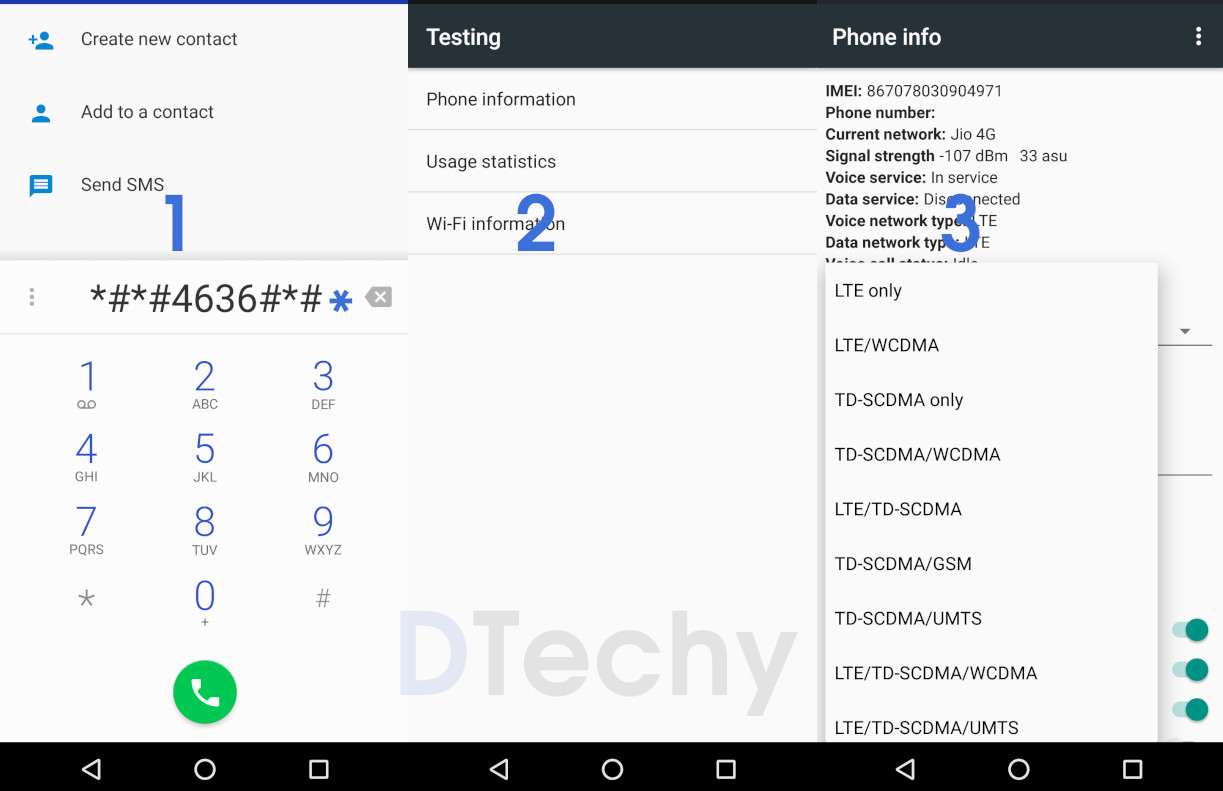 How to change 3G to 4G on android phones within Qualcomm Chipset Processor:

If your device is used mediatek chipset processor then follow below steps to use 4g sim in 3g android mobile phones.

These above two methods are good for those who want to use particular Frequency BAND like 2300MHz band 40 provides faster speed than the 1800Mhz band 3 and 850 Mhz Band 5. If you have inserted 4G sim card on a 3G phone

We also found that sometimes, when you insert Single/One SIM card in mobile phone 4G LTE/VOLTE works perfectly. But if you insert 2 SIM cards such as (one JIO sim and another SIM of 3G BSNL, Idea, Airtel, Vodafone) the 4G LTE Cellular internet data connectivity on the first sim stop working. This problem occurs due to the dual SIM card, so to fix this issue you need to enable DUAL LTE mode so that you can enjoy 4G / 3G on both the sim cards. Note: not all mobile phones support DUAL SIM 4G functionality.

How to CHECK find know my mobile NUMBER SIM | Airtel, JIO, BSNL, IDEA, Vodafone no HOW TO factory hard reset your Android phone,tablet normally or in case you Forgot PASSWORD