Xolo has officially announced there first Snapdragon 400 powered smartphone, the Xolo Q1100. Yesterday the Q1010 appeared on the company’s website and now the Q 1100 with Android 4.3 and 1GB RAM has been spotted. The phone comes with vigorous specs and comes with DUAL SIM support. It would compete with recently launched Motorola Moto G and Oppo Neo. It has 5 inch 720p HD IPS display with OGS tech. 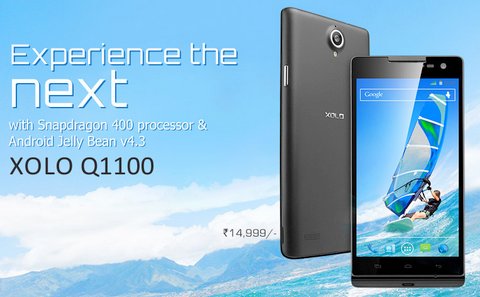 The Xolo Q1100 has 8 MP rear camera with BSI 2 sensor and 2 MP front facing camera. The phone is just 8.3mm thick and is capable of recording Full HD 1080p videos.  There is 2250 mAh battery to make the device alive. It has 1GB of RAM and 8GB of internal memory.