Celkon has launched Celkon A107+ Signature One . It is the company’s latest smartphone with Dual Core Processor & 5inch capacitive display . the A107+ was successor to A107 which was launched last May . As most of the devices Under 15,000 are based on Quad core chipsets . So the reason of price drop in Dual core processor smartphone gets very much clear .It has 5inch capacitive  display that offers 480×800 pixels resolution . The device runs on Android 4.2.2 jelly bean out of the box . other features are same that you see on any budget dual core processor . To delight the camera lovers the device has 8Mp rear auto focus camera with Led flash & 1.2MP front facing camera .It does not feature / support 3G connectivity .Celkon does the same that Karbonn has already did in Karbonn A26 Smart . Micromax A54 ninja 3.5 ( Review & Unboxing ) is another good option for 3G connectivity lovers but it is powered by single core processor with 256mb of ram . 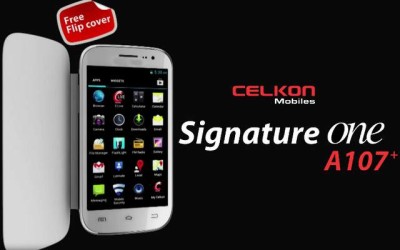