The HTC Desire 310 has been officially launched in China, although the price of the phone is not announced yet. The handset is named as HTC Desire 310W in China, as the design is bit changed from the global variant.  It comes with entry level specifications,  which makes it a mid ranger. It has 4.5 inch 854 x 480 pixels FWVGA resolution display, 1.3GHz quad Core CPU based on Meditek MT6582M chipset and 5-megapixel rear shooter. 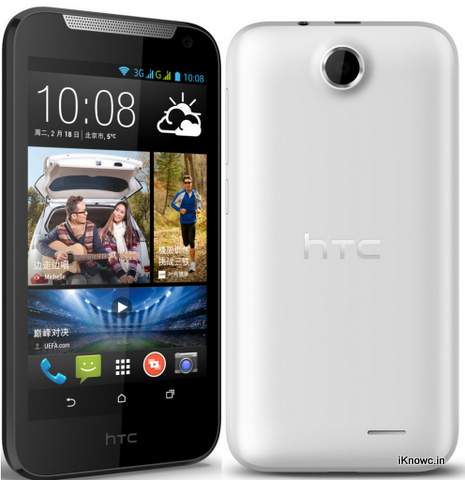 The handset packs with a 5MP primary and a VGA front camera. It measures 11.25 mm thick and weighs 140 grams. It comes with DUAL SIM support with 3G enabled. The 310W has 4 gigs of internal storage and up to 32 GB expandable storage via micro SD card. There are many handsets in the market, which comes with 1GB of RAM and a 4-core CPU at a reasonable price. Few Days back the company announced that they will introduce budget smartphones in mid of 2014, but it seems they smartphones will be with downgraded features.

It has 512MB of RAM paired with 1.3GHz 4-core CPU. It features 3G , WiFi, Bluetooth, GPS and MHL. To make the device alive there is 2000 mAh battery, which should be good enough for such screen sizes. It is capable of recording FULL HD 1080p videos, which would be great feature.