It seems that Samsung is ready to launch yet another Budget Android smartphone, the Samsung SM-J100H. The smartphone is unknown at the movement and has been appeared on official website in the form of user agent profile. It reveals lots of information about the phone.  The phone comes packs with a 4.8-inch 800 x 480 pixels WVGA screen, 1.2GHz quad core processor Marvell PXA1908 processor with Vivante GC700UL GPU. As per the leaked specs the Samsung SM J100H runs on Android 4.4.4 KitKat OS. 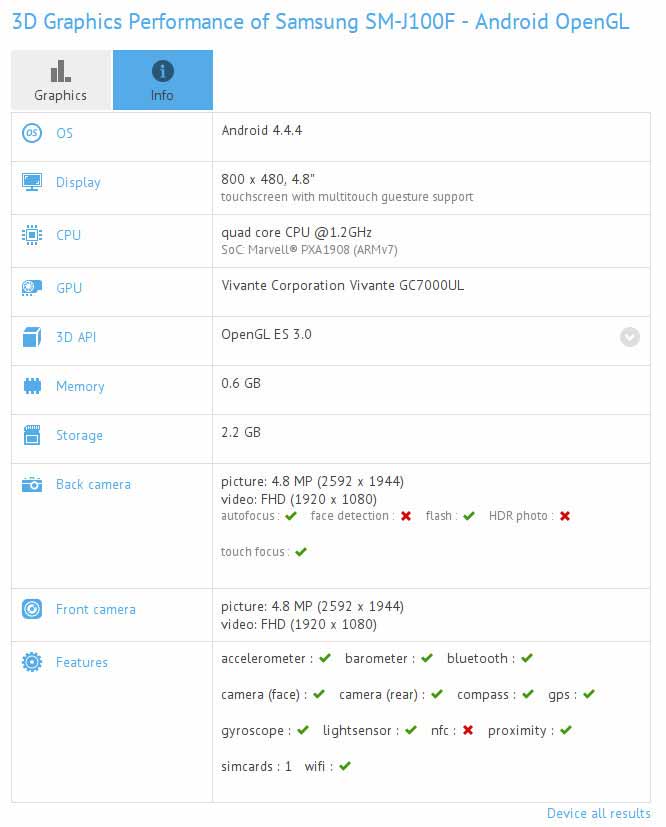 The internal storage of the phone would be 4 Gigs and the RAM would be 728MB. It will have 5MP front and 5MP Auto Focus rear camera with LED flash. The SM-J100H  has 3G connectivity and memory expansion slot. There would be Dual SIM model and single Sim variant as well. Other features are WiFi, Bluetooth, GPS and FM radio. It will have accelerometer , barometer, compass, gyroscope, proximity and light sensors. The smartphone would be launched in 2015 Q1. Considering the specs it would be priced under RS 9,000 in India. In mean time checkout Newly Launched YU YUREAK smartphone with amazing specifications and price.