Xolo has officially launched its latest flagship Android smartphone in India, the Xolo Q3000. The phone comes with some vigorous specs at this price tag . It will compete with / VS Micromax Canvas Turbo, Gionee Elife E6 and Intex Aqua i7. It terms of features enrichment it is better than its competitors, specially on its battery backup. There are many things in the new Q 3000 that makes it apart from other budget quad core handsets. 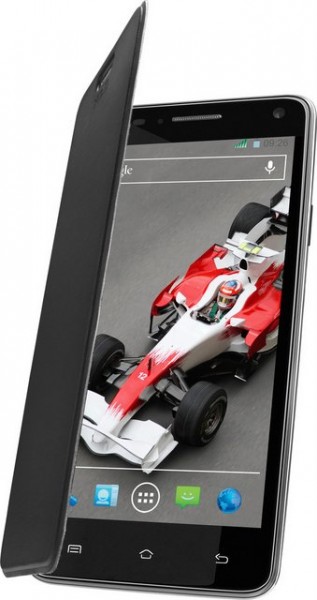 The Xolo Q 3000 comes with a 5.7 inch Full HD 1080p resolution capacitive touch screen IPS display. It gains the strength from 1.5 GHz quad core MT6589T CPU accomplished with PowerVR SGX544 GPU. It runs on Android v4.2 Jellybean operating system and packs with a 13 megapixel shooter at the back. Xolo Q3000 is a dual Sim phone and supports Full HD video recording and playback.

To make the device snappy there is 2GB of RAM , 16GB of internal memory and further expandability by micro SD card up to 32GB. Talking about the connectivity options it offers 3G, HSPA+, WiFi b/g/n, Bluetooth v4.0, GPS and USB OTG connectivity.

The Xolo Q3000 houses massive 4000 mAh battery, which would be good enough for heavy users. Both the cameras on the device comes with BSI sensor, which enhances the low light performance. We already knew the benchmarks of the kind of chipset it is using. It also features MHL whith which you can connect the smartphone to large TVS, displays etc.

The Xolo Q3000 is priced at INR 20999 and is available in White and Black colors. It will be shipped with a free flip cover and OTG cable in the box.