Gionee Elife E6 5inch Full HD android smartphone by Gionee gets leaked online . Chinese & Indian mobile manufacturer both are launching smartphones in  unmitigated way . Gionee  E6 is successor to their popular Elife E3 . It has almost double the power of E6 . The Gionee Elife E6 will be powered by Mediatek MTK6589T ( turbo) chipset clocked at 1.5GHZ  & integrated with 2GB of RAM . The device will surely beat many Quad core android devices … Micromax is also  going to launch Micromax Canvas 4 as Gionee To Launch E6 .  Micromax Canvas 4 if come with same or better specifications then there will be great competition for both the devices . 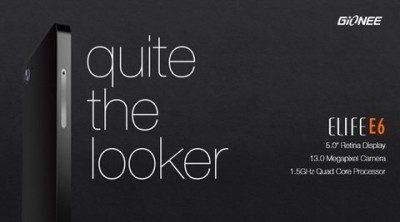 To 13MP camera at the back with BSI sensor & 5MP front facing camera will be pleasure . The device will be expected to launch in the month of July . It would be priced under Rs 20000 . Android 4.2 will be there to make the handset alive . As soon as the device launch we will surely provide you Review on that as well .

So by the month of July there will be rush of android devices based on MTK6589T . Gionee has also launched CTRL v4 budget 4 core smartphone . The company will surely get much more space & benefits in the market via Gionee ELIFE E6 .