Gionee has started teasing its upcoming flagship android smartphone the, Gpad 4. The Gpad-G4 will also follow the trend of big screens, like the other phones in the series and it will be the first 5.7inch phablet from the company. The handset looks stylish , glossary and premium, the design of the phone resembles the HTC smartphones. The features of the phone are quite impressive and the phone would not make you despondent if you are heavy user, specially the battery backup. 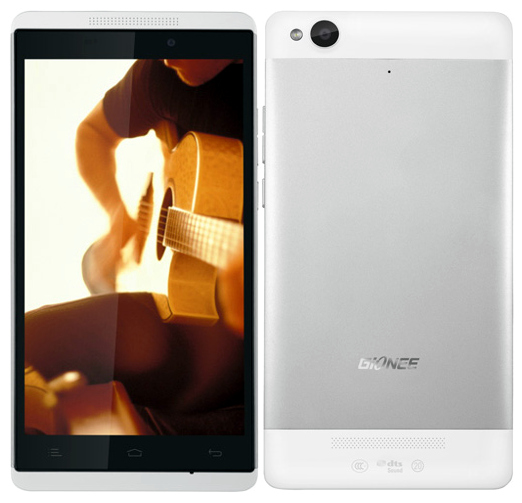 The Gpad-4 will have 5.7inch IPS HD Display based on OGS (one glass solution) technology having 1280 x720 pixels resolution. It gains the strength from 1.5GHz Quad-Core Processor integrated with PowerVR SGX 544MP2 GPU and 1GB of RAM. Thee will be android 4.2 operating system to make the handset run and massive 3200mAh battery to make the handset alive. Undoubtedly, the G4 is upgraded version of G3. The phone packs with a 13MP primary shooter  with BSI sensor , Flash, f/2.2 aperture and 5-megapixel front camera with 28mm wide angle lens. The device features DTS sound, to please the user while watching movies and listening music there. The phone has aluminum body which make it robust and just 7.95mm thick.

The Gpad G4 would hit Indian market in December. The handset comes in white color and would be priced at RS22000 in India. Although the company has not reveled any info about the pricing and launch date of the phone in India. In China the handset is priced at 2499 Chinese Yuan.