Micromax Canvas Power, the company’s latest handset with some vigorous specs has been leaked online. The handset is leaked by unofficial blog micromaxcanvas.co.in. The cool thing about the Canvas Power is, its 4000mAh battery. It would compete with recently announced Gionee M2. The handset is capable of recording 720p HD videos. 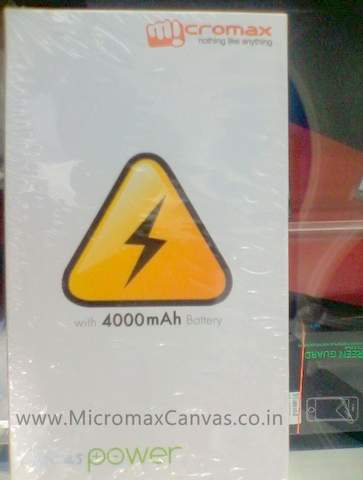 As per the leaked specs, the phone offers 400 hours of standby and 13.5 hours of talk time. Talk time is much better on Gionee M2, as it offers 24hours of talk-time. The handset has 5 inch multi touch display and 1.3 GHz quad core CPU. The Micromax Canvas-Power runs on Android 4.2 Jelly bean OS and houses 4000 mAh battery.

It has 1GB of RAM and packs with 5-megapixel primary and aVGA secondary shooter. The Canvas Power would definitely please those, who are looking for battery centric phone for long active usage.  The handset would be priced under RS 13,000. In mean time check out Micromax Canvas Duet 2.