It seems that Samsung again wants to introduce a new flip smartphone with Dual Screens , the Samsung SM-W2014. The company had launched the Galaxy Golden a few moths back with dual display. Now a new flip phone has surfaced in china. The look of the phone resembles its cousin Galaxy Golden. The handset would have  dual 3.67inch Super AMOLED displays with WVGA resolution and powered by a 2.2GHz quad core Snapdragon 800 processor. The Samsung W2014 would come with Android 4.3 Jelly bean OS, 13 Megapixel camera and 2Megapixel front facing camera. Samsung Galaxy SM W2014 would have 2GB of RAM to boost the handset and 64GB expandable memory with the use of micro SD card. Talking about the measurement it has Dimensions: 116.85 × 59.4 × 15.79 (mm) and weighs 173.5 grams. It will feature 3G, WiFi, Bluetooth, GPS and NFC. It would be exclusively available for China Only or first headed to china and then to the rest of countries. Although the Samsung has not said any thing about the Samsung W2014 smartphone. 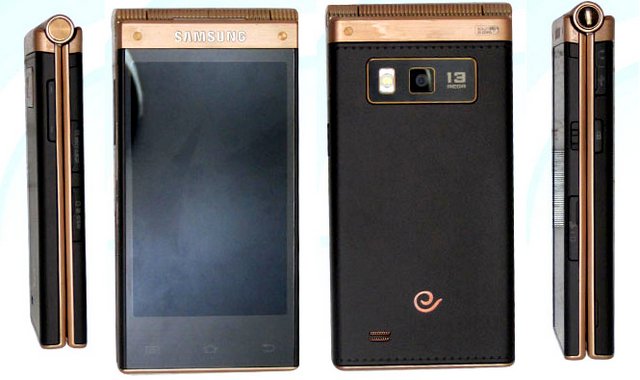