Xolo Play T1000 – Gaming smartphone with 1.5GHZ Quad core CPU . Xolo Play T1000 a Gaming based smartphone by Xolo is finally announced . As suggested by the name only that this android based smartphone is made for gaming . No doubt , it is a Quad core device but integrated on NVIDIA TEGRA 3 chipset . As compare to Mediatek MTK6589T the  NVIDIA TEGRA 3 is much more powerful . NVIDIA TEGRA 3 is reliable , durable & of course performance-able . It seems that the war of 1.5GHZ  based Budget Quad core device begins now . Tomorrow Micromax is going to launch Micromax Canvas 4 A210 . Gionee Elife E6 with 1.5GHZ Mediatek Mtk6589T quad core is also going to be launched soon . iBerry Auxus Nuclear N1 with 1.5GHz quad core CPU , full HD display , 8Mp front facing camera & 13MP rear Af camera is also announced . So JULY is the month for Budget 1.5GHZ Quad core based smartphone in India . All above would be the competitor of the XOLO PLAY T1000 . 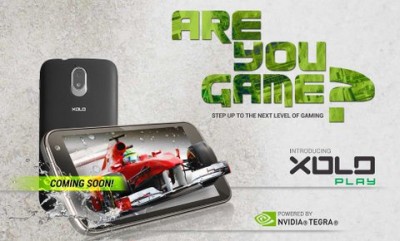 The device is powered by 1.5 GHz Quad-core with 5th battery saver core . To render the graphic performance the device has 12 Core NVIDIA ULP GeForce which is clocked at 416Mhz . The device has 1GB RAM & 4GB ROM ( internal memory ) . Further memory can be expandable upto 32GB . The device has 4.7inch 720p display ( IPS with OGS ) . At the back there is 8Mp rear AF camera with BSI sensor & 2MP front facing camera . The smartphone is running on Android 4.1 jelly bean OS . It is single Sim device . The device will have Accelerometer , Magnetometer , Ambient light sensor and Proximity sensor . The device will be capable of recording 1080p videos & playing as well . It will be powered by 2000maH battery . The device has 3G , 2G , Wifi , GPS , Bluetooth , 3.5mmaudio jack & microUSB connectivity options . Xolo Play T1000 will soon hit the market , probably after Gionee Elife E6 .

The price of the device is not announced yet .

But according to us Xolo Play T1000 will be the first choice for those who are looking for budget Quad core device with snappy gaming performance .