Google Nexus 5 is again in news and hype. The Nexus 5 is not launched or released yet but still the handset is in hype because of several leaks. Now the benchmark of the handset is leaked. The scores that device is creating are better than Samsung Galaxy S4, Sony Xperia Z1, Lg G2, Apple iPhone 5 and HTC one. The Nexus 5 and Apple iPhone 5s scores equal in GFXBENCH that is 23 points. The Nexus 5 would features Adreno 330 graphics processing Unit, 2.2GHz quad-core Qualcomm Snapdragon processor paired with 2GB or 4GB of RAM, 1080p Full HD display and Android v4.4 KitKat. The leak benchmarks makes the prospect of the handset more exiting. We hope Google will soon make happy to despondent hearts. 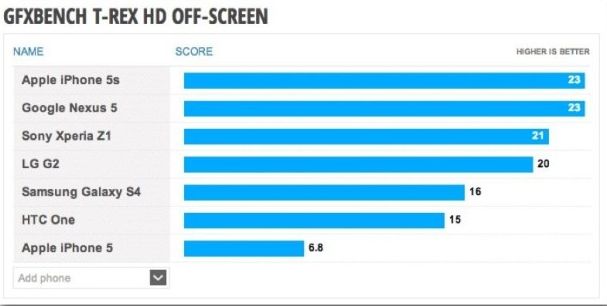