Karbonn mobiles yet announced there another budget smartphone – KARBONN A6 . Karbonn a6 comes with 1GHZ of processor and dual SIM capability too . Karbonn a6 is equipped with 4inch IPS display . Karbonn a6 is priced at RS 5390 and is available on snapdeal & flipkart .  Karbonn A6 comes with all standard features and specs of a standard android smartphone But there is now word for 3G . The main disappointment in the handset is – NO 3G , so you don’t have 3G OPTIONS IN HANDSET . Micromax A54 Ninja 3.5  has 3G and other features too , you can check our unboxing and review of Micromax A54 Ninja3.5 . 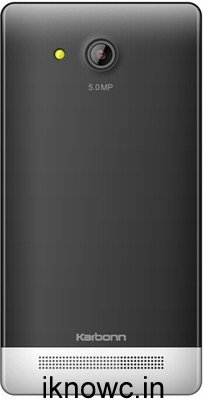 Karnonn A6 is powered by 1GHz single core processor . The handset has dual sim capability and does have connectivity options like – 2G,wifi,Bluetooth ,micro usb and 3.5 handsfree jack . The device has 4inch IPS display having resolution of 480×800 . There is 5MP and a digital camera  (may be vga) camera at rear & front respectively . The rear camera is 5Mp having autofocus capability . Karbonn A6 has 512mb of  RAM and internal memory of  104mb . A6 has  very premium look & the white body construction at the bottom has LED which blows when  you use the device and it gives very premium look to the device . A6 has a li-ion Battery of 1450 mAh which claims talk time of 3.5 hours and standby time of 250 hours .

Micromax A54 has 3G capability and also other standard features  . Micromax a54  price is  less than RS 4700 . To know more see our Unboxing and review of Micromax A54 ,  so that you can easily compare which one will be the best buy for you . In our opinion if we compare micromax a54 to Karbonn a6 , then karbonn a6 better and nice specs then a54 if we left the 3G  . BUT also A54 is about 800 rs less then karbonn a6 and also does have 3G . Micromax A54……

Karbonn A6 Price is Rs 5390 and you can buy it from flipkart or snapdeal  .

Karbonn A6 is good handset for those who wants a smartphone at budget  . But there is 3g in phone which may disappoint many peoples . Overall the specs of karbonn A6 are great & look is premium and glossary . The handset fall under the price category of RS 6000 . If someone wants  a smartphone with  all features &  3g too , then he/she may check Micromax A54 or should wait for some other handsets to launch .

MICROMAX A54 UNBOXING AND REVIEW

2 Comments to KARBONN A6 – 1GHZ Budget smartfone with Stylish LOOK